Do not trust in 'good luck' when it comes to your finances and certainly your financial future.

People make their own luck by great preparation and good strategy.

Understanding the contributing parts that are going to impact (negatively) on your retirement enables you to prepare and develop a strategy, based on realistic expectations — whether it’s to work longer, save more, or invest more wisely and proactively.

Then, when you dodge the ‘reduce age pension’ bullet that’ll hit so many of your peers, and they say that ‘you were lucky’. You'll know, LUCK had nothing to do with it. Forewarned is forearmed.

We have reached a point where society’s concept of retirement is changing. Government led, the the pendulum swung too far. Current generations in the work force will see a return to people staying in the workforce much longer (probably, well into their 70s).

It's straight forwrad to explain why this is the inevitable outcome without significant tax changes and interventions.

It becomes essential that individuals plan and act on plans to self-fund their retirement. As a long term hold, passive investment strategy, property provides a very strong option.

Call 1300 67 27 28 to talk to one of our property consultants or panel of finance consultants. 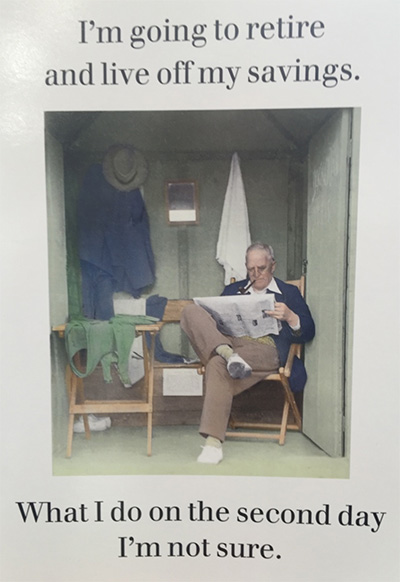 The article reports that "Unfortunately, the work opportunities for most retirees are limited reducing scope for many to take advantage of the substantially more generous income test arrangements. Planning ahead for retirement in the future will nevertheless involve maximising opportunities for full or part time work and placing less emphasis on accumulating assets other than the family home exempt from the asset test."

Whaaat?? "...less emphasis on accumulating assets" - Where's the logic?  Surely that commentary has to be purely for the sake of political posturing.

Let's look at what that "less emphasis on accumulating assets" approach achieves - Mindful it is in a bid to 'be eligible' to receive what is at best a 'subsistent standard of living' pension that the state is able to provide. The advice is recommending abandoning any plans to become asset wealthy prior to eligiblity for a pension, because you'll be reducing your potential age pension payments.

To us at InvestorGroup that's ridiculous application of what can only be dubbed 'Fool's logic'. The proposed alternative is to not acquire assets that create passive income streams and leave no choice but to HAVE to work to create survival income.

Many of us perhaps happily choose to remain active in the workforce for longer, but that should be your choice not a necessity.

ARE YOU PLANNING TO ENJOY LIFE ON YOUR AGE PENSION? Look at the numbers below - Good Luck if you are!

Each year, the Commonwealth Government reviews the fortnightly pension rates. Below are the current maximum fortnightly payment rates for 2016/17 :

All hat and no cattle

As the banks appear to detach from the RBA monetary policy, let's remind ourselves of the RBA intent.

Australian interest rates are set by the Reserve Bank of Australia, an independent body established in 1959. It is guided by an inflation targeting regime that seeks price stability in the 2-3% consumer price index band.

Despite the RBA decision to hold rates at 1.50% today (6/12/2106), many banks are increasing rates. With no clear uniformity, several revised their fixed rate terms upwards whilst others held fixed rates constant and modified their variable rates upwards. The only consistent modification across the board was the rate move is in an upward direction.

But despite the RBA keeping rates on hold the Banks of Australia story is largely one that appears disconnected from the realities facing the Australian economy. It’s dividing the opinions of many 'experts' as to the direction of the next rate move.

To quote Philip Lowe, Governor of the RBA - "...The global economy is continuing to grow, at a lower than average pace..."

As we see it, there are really three main drivers and levers of interest rates: Inflation, Unemployment and the Aussie dollar.

Exchange rate - Remains stubbornly high, despite US Dollar strength around the world.

So with inflation well below the target band, unemployment bubbling along rather than falling (outside of major cities employment is under enormous pressure), and the Aussie dollar stuck in the uncomfortable zone, it is very hard for me to see any case for raising rates in the foreseeable future.

But that would certainly not seem to be how the banks see it.  Perhaps they're factoring some additional profits in advance of any uncertainty in the future, before Trump is empowered as President.

It's perhaps the banks being a little opportunistic. A move easily argued with the non-specific and 'broad brush' justifying comment of increases in Cost of Borrowing, but at this point little seems to really support that argument. Without substantial back up, it would seem a case of "ALL HAT AND NO CATTLE".

At its meeting today, December 6 2016, the RBA Board decided to leave the cash rate unchanged at 1.50 per cent.

According to the RBA - "The global economy is continuing to grow, at a lower than average pace. Labour market conditions in the advanced economies have improved over the past year. Economic conditions in China have steadied, supported by growth in infrastructure and property construction, although medium-term risks to growth remain. Inflation remains below most central banks’ targets, although headline inflation rates have increased recently. Globally, the outlook for inflation is more balanced than it has been for some time."

While the critics were adamant that the Brisbane West Wellcamp Airport had as much chance of taking off as one of those figurative white elephants, Mr Wagner and his brothers put $200 million and the muscle of their inter­national construction, building services and manufacturing group behind the project.

Two years on from the opening of the gleaming terminal building, the airport has a designation code of WTB and a future that hardly anyone envisaged.

“The … local council didn’t have the money or the foresight or the vision, the state government doesn’t do airports and the federal government, you know, if they do anything at all they take years and years to get around to it,” said 56-year-old Mr Wagner, who drove the development. “So we decided to do it ourselves. It felt right. It has always felt right.”